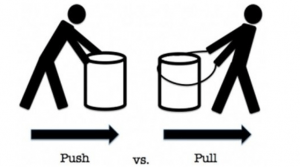 It’s not just a Sales Cycle, it’s a Buyers Journey… but who’s in control?

The roles have now reversed.

Long sales cycles, small margins, and high turnover are common challenges for  supply chain sales people who ‘push’ their prospects into next steps. If we’re having to push the client to move them through the funnel (continue going for a long series of small yeses) something is wrong as this means the client has not seen the value of our solution.

By the same token: short sales cycles, high margins, and high client retention rates are common rewards for sales people who allow their prospects to pull them into next steps. By providing the “right” education, we can help the client to come to their own conclusions about our value.

When we provide that education, the client will ask for the next steps, next meeting, next proposal, and even the next invoice. The VP of Commercial for Schneider Logistics coined the phrase “Prospect Compliance Momentum” to discuss the pulling effect she’d never experienced before.

What is Needed to Gain Prospect Compliance Momentum…

In a first sales meeting, buyers are looking for sales to:

Because our clients are providing this information upfront, helping the buyer to see their “gaps” and the “impacts” that they haven’t even thought about, the buyers are pulling them through the sales journey, rather than waiting to be pushed.

Below, you’ll see real examples on how prospects pulled Schneider’s VP of Sales into opportunities because she decided that her LinkedIn profile, marketing content, and personal communications should be focused around sharing the insight that educates on areas where Schneider can help them grow.

Example #1: Driving an Unexpected Urgency with Sygma (an Unresponsive Prospect)

Like many other supply chain & tech firms, the sales team at Schneider was looking to marketing for more leads as they were only advancing 1 out of every 5 opportunities toward revenue – a 20% win rate vs. our clients’ win rate of 75%+. They figured that the more leads that marketing can deliver – the more revenue they can produce.

However, in working with both the sales and marketing teams, I found that the issue was not that the sales team needed more, higher quality leads. In fact, in many cases the sales team had the right connections. Rather than one-to-many campaigns, they needed marketing that supporting specific sales conversations with named accounts & personal contacts. For example, Schneider’s VP of Sales was connected to Sygma’s VP of Logistics however, the connection was inactive and unresponsive to all phone, email and social contact for nearly 5 years. Because they were previously pushed through a long, drawn out sales process that was unsuccessful because they did not realize the gaps in their current inbound processes or see a compelling need for change, they believed they had no reason to speak with sales.

As Sygma was a named target, profile content was designed specifically to drive a TMS win with this company. One-on-one messaging was changed to focus on stories of how gaps found in Sygma’s supply chain was uniquely filled for a similar customer and what the impacts would be to Sygma’s logistic ops & their customers. As a result, the Logistics VP joined Schneider’s LinkedIn group that was filled with discussions designed to reframe how mid-market supply chain leaders thought about their supply chains and supporting technologies.

He willingly participated in Schneider’s “State of the Mid-Market Supply Chain” survey, which was designed to have the supply chain VPs admit to themselves where gaps may lie. Within the survey the VP identified process gaps, employee impacts and future needs and gave Schneider the personal insight needed to position additional “real-time” articles & discussion points that proved that Sygma’s supply chain was being under-served.

Soon after, he requested a 30-minute conversation to better understand the ins and outs of Transportation Management Systems (TMS), which was quickly scheduled. The conversation was not about Schneider, but about the benefits of ‘network optimization’ and how it would impact his business, his team, and his customers. Because Sygma received the great value of a consultative education rather than a pushy sales experience, they quickly requested to move forward with next steps to set up a conference between both operational teams where the educational process was repeated. This second meeting prompted the customer to ask for a proposal!

At every interaction (on and off LinkedIn) an unexpected urgency was created to the extent that the prospect was pulling the sales team through the process at a much faster rate than what the sales team was used to. Although they were previously unreachable and unresponsive, Sygma became a happy client because they could see a differentiated value and a compelling reason to consider a change. The insight shared online created questions in the customers’ mind that, in conversation, lead to answers about Schneider’s competitive advantages.

Example #2: Driving an Unexpected Urgency with Milacron’s Supply Chain Director Who Did Not Initially Realize the Gaps in Their TMS

While most sales and marketing leaders use LinkedIn groups as a “news feed” for their latest blog posts, Schneider’s VP of Sales used group discussions to challenge the ideas and assumptions their target’s key supply chain leaders held. The discussions start the reframing process while the supporting article continues the reframe, creates the emotional connection, makes the logical reasoning for change and provides a new vision and path to value.

The Director of Global Supply Chain for Milacron was the owner of a LinkedIn community, where Schneider’s VP was creating discussions. He then checked out her profile, where the Director found even more education and commercial insights about the gaps that are found in the supply chains of mid-market manufacturers like Milacron. This moved Milacron’s Director to reach out to Schneider’s VP as you can see by the image below:

Before the meeting was scheduled, Schneider’s VP pre-loaded the sales conversation with even more information on how the TMS should impact the different parts of supply chain operations, finance and also their customers. This lead into a phone conversation that was focused on the landscape of TMS service offerings and how each type of system can positively or negatively impact key metrics in your operation, rather than talking about Schneider.

At the end of the conversation, Milacron requested to schedule a follow-up. The second call revealed that there was an opportunity to bid on transportation services in addition to TMS, and Schneider was asked to join the customer at their Ohio facility for further discussions. By sharing compelling insight where prospects want to find it, Schneider was able to create two opportunities in which they were strongly differentiated and now highly likely to win.

Example #3: Driving an Unexpected Urgency with an Existing Client That Was Unaware of Schneider’s Full Value

Treehouse Foods was an existing customer for Schneider’s transactional freight brokerage service, however with only a 1% share of wallet. 99% of the clients’ business belonged to the competitors.

The freight sales rep would ask for opportunities to discuss growing the business each month, but the client did not see a value or find any compelling reason to move forward. They saw Schneider only as a tactical partner who would provide low-cost trucking rates, rather than a strategic partner who could also help them reduce larger operational costs.

Now, because key insights were made available online, Schneider’s VP of Sales was able to engage the senior decision makers one-on-one and invite them into a LinkedIn community with discussions around how mid-market supply chains are under-served by gaps in technology and processes. Rather than using the community as a news feed or ‘tips and tricks’ blog, it was instead used to create an understanding of gaps, re-frame the client’s ideas, and open their minds to a new path to value.

These discussions revealed significant challenges within their existing partners and processes, which the sales team has also leveraged in their live, offline discussions. Because the inbound supply chain leaders were pulling the sales team through the buyer’s journey and into discussions on “how Schneider would fix their processes”, we know that Schneider is positioned to take over their transportation management once their existing contract ends.

Example #4: Driving an Unexpected Urgency with Vizio That Was Considering Their Options

The supply chain leader at one of the top flat-screen TV manufacturers, which is also America’s #1 sound bar company, was considering their options for a managed TMS solution. As part of their buying process, they contacted Schneider and their top 5 competitors to compare features, benefits, costs, and ROI.

Traditionally, RFP’s had a very small win rate because the client will only see the lowest price rather than the best value. Schneider considered declining to bid for this reason, but having seen the urgency created in customers by using commercial insight and personal relevance to expose unconsidered gaps, they decided to use their LinkedIn content even within their phone and in-person meetings.

The manufacturer’s leadership team gained a new view of their business through the educational and re-frame based sales experience, discovering areas of cost and risk that were not previously considered. Once more, this caused the customer to pull Schneider forward through their journey.

Overall Results Speak for Themselves….

Over the first two wins alone, Schneider has received a 3378% ROI while drastically reducing the amount of sales time needed to secure a close. Because they also have an average client retention of 8 to 10 years, this will grow to over 21,000% ROI – and that’s before including the additional upcoming awards.

This consultative approach to social selling creates an improved experience for the client, to inside sales, and to outside sales by enabling one cohesive line of conversation all the way from Open to Close. While our competitors are struggling to close on 10% of their leads, we can now plan to close 40 to 70% when applying Account Based Sales & Marketing through LinkedIn.

This is why I believe that it’s time we stop pushing and help the customers to pull us forward instead. Join our Account-Based Enablement LinkedIn Group where we show how marketing can increase their influence over revenue while sales and account teams drive new business & account growth.